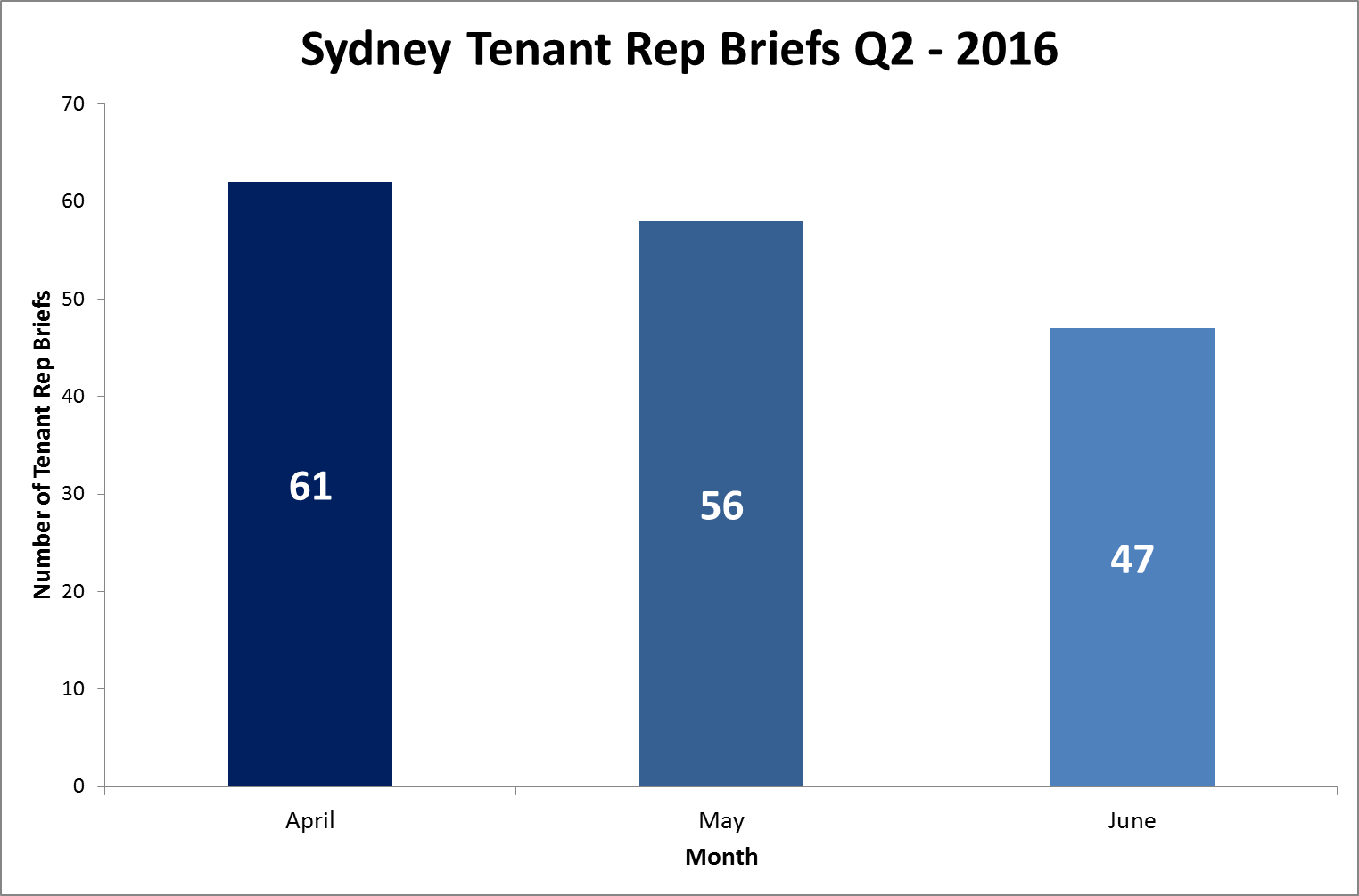 Sydney’s dominance in terms of both the number of tenant advocate professionals, and the volume of active space requirements that they control, has continued unchallenged during 2016.  With an office market larger than any other mainland capital city – and New Zealand as a whole – Sydney has seen a total of 441 tenant rep briefs so far since the start of the year (of which 67% were looking for space in the CBD).  In comparative terms Sydney has seen almost twice as many requirements as Melbourne over this period (238 so far).

In Sydney, Q2 also saw a greater number of requirements than Q1 as momentum picked up as the year progressed. While Q3 is not yet finalised, the numbers have remained strong (at 192 so far) and indicate a solid pipeline of leasing deals and fit out projects ahead.   In our July issue of Market Talk, like in Sydney Property Daily also recorded an increase in the total number of tenant rep briefs in Q2 for Melbourne, compared to Q1 of 2016.

Tenant advocacy groups which recorded the largest number of briefs to market across both Q1 and Q2 included Tenant Representation Services (44), Colliers International (43) and Cushman & Wakefield (25).

This high level of market activity is flowing from the usual drivers for office space change –  lease expiry, organic growth and mergers and acquisitions.  It is also being accentuated by larger numbers of landlord forced relocations. The latter are primarily in the CBD and North Sydney but also to a lesser extent in Macquarie Park.

The biggest active brief to market across Sydney in Q2 of 2016 was the NSW Government’s collective search for 43,000-55,000sqm in Parramatta for a number of its departments.   On an individual organisational basis the largest for the quarter was Study Group Australia which is looking for around 10,000sqm via Marprop, followed by Baker & McKenzie (8,000-10,000sqm) via ICPO –  and which has been on active coverage in Property Daily since July 2014.  More recently in Q3 Property Daily broke the story on advertising group Dentsu Aegis Network co-location requirement in Sydney (14,000-16,000sqm).

As a part of our daily reporting of active requirements in the market, Property Daily also offers a live Tenant Advocate Contacts Directory.  This is a confirmed and up-to-date dataset of tenant advocate contacts in the Australian office leasing markets. Not only is this a who’s who of professionals representing some of the biggest commercial tenants across Australasia, but it can be a useful tool for direct contact & assessment of your relationships in this field.